Our nation is afire, ignited by the highest human ideals – equality, justice, accountability – made combustible by the most base in human nature – greed, gross abuse of power, thoughtless crimes of opportunity.

Cities across the nation blaze. Eyes burn, and it is difficult to tell from what – tear gas, city blocks on fire, the cries of family-owned businesses scorched after just reopening as pandemic restrictions were eased. We sit in the comfort of our legally purchased recliners, watching our legally purchased big-screen televisions, shaking our heads in disbelief. “Why would they burn their own towns? How does that help? How is stealing a microwave honoring George Floyd?”

I am not condoning the violence – neither that of the rioters, nor that of Derek Chauvin. But, if we truly want to stop it, we must understand it. If we fail to address difficult issues in a civil way, the result will be continued flashpoints of incivility.

Every time something disturbing happens – a school shooting, systematic abuse, exploitation of power, hateful violence – we wag our fingers and say “tsk” and light a candle or two for the victims. We take comfort that justice was served – with an arrest, a killing, a conviction – and return to our false sense of security. But we don’t OWN it. We pretend it is one bad actor, that the threat has been neutralized. We don’t think about the thousand ways that bad actor was enabled.

We forget the three other officers who stood and watched while now-fired police officer Chauvin had his knee on the neck of an unarmed, bound man pleading for his life. We forget about the 18 other complaints previously leveled against Chauvin. And that’s just the official record. How many times were victims afraid to complain, left hopeless by the inaction of the department? Two minutes and fifty-three seconds after Floyd became unresponsive, Chauvin finally lifted his knee. Not one officer started CPR after they found that Floyd had no pulse.

We are those three officers. Our privileged certainty in the righteousness of our systems of power, our complacency to put loyalty before ethics and our defense of our sacred social structures are those officers.

Floyd and Chauvin are archetypes in a story told over and over in small towns, large cities and rural communities. We are no exception.

There are subtle winks and nods acknowledging the price we pay for being invited to be part of a group, kneel in a pew, sit at a table, wear the colors. It starts small: a few bucks from the collection plate, parking privileges, racial jokes, laughing off advances, “he doesn’t mean anything by it.” With that protection established and knowledge solidified that rules aren’t meant for some people, for some groups, it grows: donations paying for cars and trips, hiding files, failing to investigate complaints, covering up, smoothing over, justifying behaviors.

Until one day, everything turns violently ugly. We didn’t consent to kneeling on the throat of a bound man until he died. But, those monumentous, stomach-turning abuses have a parasitic dependency on our smaller complacencies. In which of those have we been a part? What would happen if we had the bravery to question what is subtly, dangerously unquestionable?

Justice and privilege are not equal

Your experience of justice, power, ethics, and perception might be completely different from that of your neighbors, especially those of differing races or ethnicities, gender identities, sexual orientation, faith, culture, or whose backgrounds include trauma. Your assumptions of the purity of law, order, and civility in the United States is not always shared. Some have lost trust, not because they are criminal rabble rousers, but because those sacred systems have exhibited sustained and horrific failures. For many of our nation’s citizens, it is not logical to believe in those systems.

You are asking people to follow rules of civic engagement that don’t apply to them – rules that, for them, lead to being choked to death by a man in power while three others look on, or shot to death for jogging through a “white” neighborhood.

Your assumption IS your privilege. That doesn’t mean you are evil. No one is asking you to be ashamed of your heritage or your success. It simply means your experiences are different, and, yes, they benefit you. To end it, you must understand that others have different experiences in our shared communities, observe those differences and have the courage to speak when others’ experiences differ from what you have come to expect.

The most difficult truth

The nonsensical, disproportionally violent reaction of the rioters reflects the nonsensical, disproportionate violence that citizens in America encounter in our justice system and communities every day. That should enrage every one of us, just as the riots have enraged us, just as good and decent police officers across the nation are enraged by Chauvin’s actions. Privilege, success, ethics, and fairness are not limited commodities. Empowering others to share them lifts us all. Continuing to be ignorant of and complacent in anything other than equal distribution of those ideals upon which this great nation was built means inviting continued civil unrest. It means we are willing to be one of the three other officers.

That’s why they riot.

How Westeros and A Galaxy Far, Far Away Can Help Heal Our Nation

Pushing Outside of Our Comfort Zone 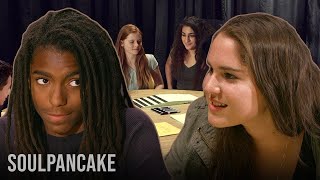 Lowering the Technology Gap One Grant At A Time!